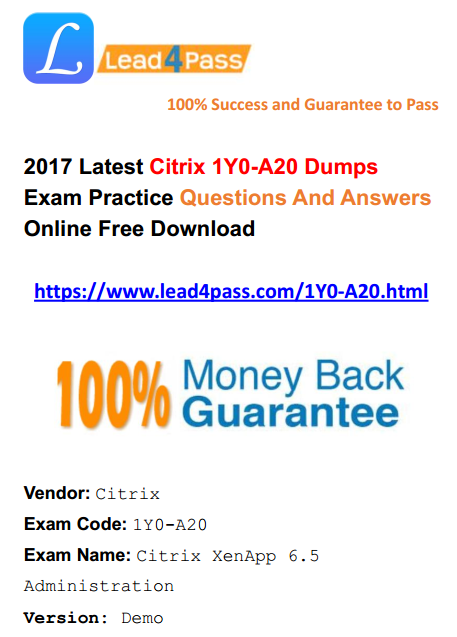 QUESTION 2
Scenario: An administrator manages a XenApp farm that uses Citrix Provisioning Services to automate the addition of XenApp servers to the farm. The administrator must implement a solution to automate the addition of new servers to the published resources, load evaluators, Citrix policies and load balancing policies.
Which two should the administrator configure to meet the requirements of the scenario? (Choose two.)
A. Zones
B. Policies
C. Worker groups
D. Load evaluators
Correct Answer: BC

QUESTION 3
Scenario: An administrator is setting up a XenApp farm. There are 15 to 25 users in the farm. To ensure high availability, two servers will be installed. The administrator is deciding on the best placement for the Web Interface server. Remote access is NOT going to be considered at this time.
The administrator should install the Web Interface __________. (Choose the correct option to complete the sentence.)
A. on both servers
B. on one of the two servers
C. and XenApp on both servers
D. and XenApp on one of the servers
Correct Answer: C

QUESTION 6
Scenario: An administrator is notified that a single XenApp server has an issue with starting the IMA Service. A quick check of all dependent services shows there are NO issues. When the administrator checks the MF20.dsn file using Notepad, the file is unreadable and contains miscellaneous characters.
In order to quickly resolve this issue, the administrator should copy the __________. (Choose the correct option to complete the sentence.)
A. contents only of a working server’s IMA folder
B. folder and contents from a working server’s IMA folder
C. MF20.dsn file from another server and reinstall XenApp 6.5
D. MF20.dsn file from another server, renaming the hostname of the XenApp Server
Correct Answer: D

QUESTION 7
Scenario: Users are receiving the error shown in the attached exhibit when connecting to Notepad on XenApp.
The administrator runs the QUERY FARM command on the server and receives results in the second attached exhibit.

QUESTION 8
Scenario: Users are receiving the error shown in the attached exhibit when connecting to Notepad on XenApp.

The administrator runs the QUERY FARM command on the server and receives the results shown in the second attached exhibit.
Which three events could the server load value of 10,000 indicate? (Choose three.)
A. The server is offline.
B. The server CANNOT contact the Citrix license server.
C. The server has reached its limit of 10,000 running processes.
D. A server load evaluator applied by policy indicates the server is at full load.
E. The particular server has a problem reading performance counter information.
F. The administrator has assigned an invalid load evaluator to the server using a policy.
Correct Answer: DEF

QUESTION 10
Scenario: A company recently upgraded all their Citrix licenses from XenApp Enterprise to XenApp Platinum. The Citrix License Server has been correctly updated and configured with the correct Citrix license files. Now users are NOT able to connect.
Which step should the administrator take to allow users to connect again?
A. Restart the server hosting the Citrix data store.
B. Upgrade the Delivery Services Console to the AppCenter.
C. Update the XenApp product edition in the Computer policy.
D. Restart all Citrix servers reporting 20,000 as their current load.
Correct Answer: C

QUESTION 11
Scenario: Users are complaining of poor audio quality from their XenApp applications. They are using version 11 of the online plug-in. XenApp audio policy has been configured using the installation defaults.
What can the administrator do to improve audio quality?
A. Upgrade the users’ online plug-in to version 13.
B. Set the progressive compression to one level higher than the lossy compression.
C. Configure a XenApp bandwidth limit policy and give audio redirection a 100% allocation.
D. Create a XenApp Computer policy and increase the Windows Media Redirection buffer size to 10 seconds.
Correct Answer: A

QUESTION 12
Users of a medical application are complaining of poor quality images when viewing X-ray scans.
The administrator should create a XenApp policy to __________. (Choose the correct option to complete the sentence.)
A. enable image caching
B. set the Lossy Compression Level to None
C. set the Progressive Compression level to Low
D. set the Heavyweight Compression level to Disabled
Correct Answer: B

QUESTION 13
An administrator wishes to disable the prompt given to users when Flash content is displayed in their XenApp session without impacting the performance of Flash content.
See the attached exhibit to view the prompt window. 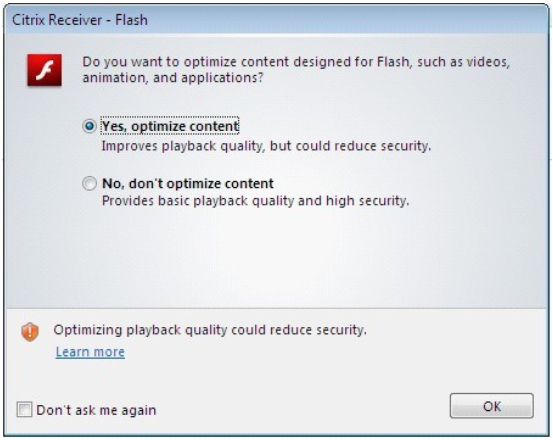 QUESTION 14
Scenario: Users working from a remote branch office using XenApp are reporting that Flash content is NOT displayed on an internal web page. Branch office users have NO direct connection to the intranet. Other Internet sites are unaffected.
Which two steps could the administrator take to resolve the issue without impacting Flash performance? (Choose two.)
A. Upgrade the Receiver client on the users PC to version 13.
B. Create a XenApp policy to enable Flash redirection for remote users.
C. Downgrade the version of Internet Explorer on the XenApp server to version 7.
D. Enable server-side content fetching policy on the client device using the supplied .ADM file.
E. Add the URL of the intranet site to a Flash server-side content fetching URL list policy setting.
F. Uninstall the Flash player on the XenApp server, and install the 10.1 Flash player or later on the client.
Correct Answer: DE

QUESTION 17
Scenario: An administrator is creating a new XenApp farm. The farm will use hosted applications and applications streamed using Microsoft App-V technology.
Both Microsoft Windows and Apple OS X computers are in use in the environment. Management requires an automated process to deliver all necessary clients and plug-ins.
Which two components should the administrator use to automate the process of delivering and updating client plug-ins? (Choose two.)
A. Microsoft Group Policy
B. Citrix Receiver Updater
C. Citrix Merchandising Server
D. Apple Enterprise Management Software
E. Microsoft System Center Configuration Manager
Correct Answer: BC

QUESTION 19
XenApp users need to be able to move between client devices and reconnect to both active and disconnected sessions.
Which action must an administrator take to enable this behavior?
A. Install Web Interface and XenApp with the default settings
B. Disable Workspace Control on each Web Interface server
C. Configure a XenApp policy to enable the Smooth Roaming feature
D. Ensure that the Web Interface server is in the same domain or forest as the XenApp farm
Correct Answer: A

Newest helpful Citrix 1Y0-A20 dumps pdf practice materials and study guides free download from lead4pass. The best and most updated latest Citrix https://www.lead4pass.com/1y0-a20.html dumps pdf training resources which are the best for clearing 1Y0-A20 exam test, and to get certified by Citrix, download one of the many PDF readers that are available for free, high pass guarantee.